Looking for the best place to sit down for a lobster meal in Victoria?

Whether you’re celebrating an anniversary, birthday, or other special occasion, this “king of seafood” is always a wonderful choice that will truly elevate a night out.  You can add a 4 oz 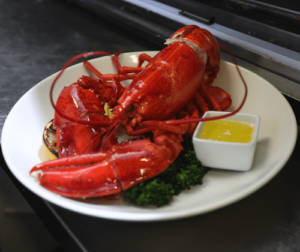 Atlantic lobster tail to any other menu item, like our 10 oz New York steak with red wine & peppercorn demi-glace, for a sumptuous surf and turf option. You can also add a lobster tail to a rich pasta dish, like our creamy seafood linguini, made of plump Saltspring Island mussels and clams, prawns, spinach, and parmesan.

“Harbor view. Service is amazing. My wife has a few food allergies and the staff and Chef took these very seriously and tailor made her a salmon feast. I had the Steak and Lobster meal with the crab add on. Wow. Best Lobster I have ever had.” – Tony

Atlantic Canada is a lobster haven, and the majority of Canadian lobster is caught in and around Nova Scotia and New Brunswick, making it one of the top exports on the East Coast. The Atlantic lobster fishery dates back to the mid-18th century. It’s worth around $1.3 billion, and is a vital industry that employs tens of thousands to this day.

Shediac, New Brunswick is well-known as the “lobster capital of the world” having opened its first lobster processing plant in 1861. The community of 6,664 even has a lobster on their coat of arms. Shediac is also home to the world’s largest lobster, a sculpture 11 m (35 ft.) long, 5 m (16 ft.) wide, and 5 m (16 ft.) high. This 35-ton monument was erected as an ode to the crustacean in 1989 by the Shediac Rotary Club.

If you happen to find yourself on the other side of Canada, be sure to take part in the ongoing Lobster Trail experience or the Lobster Crawl every February. Paying homage to the Atlantic lobster, the Lobster Crawl is a full month of fun events and experiences, from sip & savour events to surf packages.

The Atlantic Lobster isn’t native to the West Coast, and since they’re in such plentiful supply on the East Coast, there’s really no need for West Coast lobster farming. According to the Canadian Encyclopedia, between 1896 and 1966, around 5000 lobsters were introduced into BC waters. They survived, but didn’t breed enough to make a difference in population. 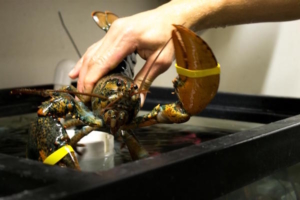 Can’t get to the East Coast? At Finn’s, you’ll find fresh Atlantic lobster cooked on demand to calm those lobster cravings. Our lobsters are 100% Canadian, flown in several times a week fromNova Scotia. Straight from our saltwater tank, and served steaming hot with delectable drawn butter, charred lemon, seasonal veg and tender baby potatoes, this is a mouth-watering delicacy. Our guests think so too:

“My experience at Finns was AHHH-MAZING. Such a gorgeous space and great location. The lobster was to die for.” –Natalie C

Pair your lobster plate with a glass of Red Rooster Chardonnay or Gray Monk Riesling from our selection of BC VQA wines. If you’re unsure which to try, our knowledgeable servers will be glad to assist.

Hungry? Tie on your lobster bib and enjoy a buttery, delicious meal of fresh Atlantic lobster with us at Finn’s Seafood, Chops & Cocktails restaurant  at 1208 Wharf Street, Victoria, BC, or make a reservation for a group booking or special event.

Burgers Made In-House
Scroll to top